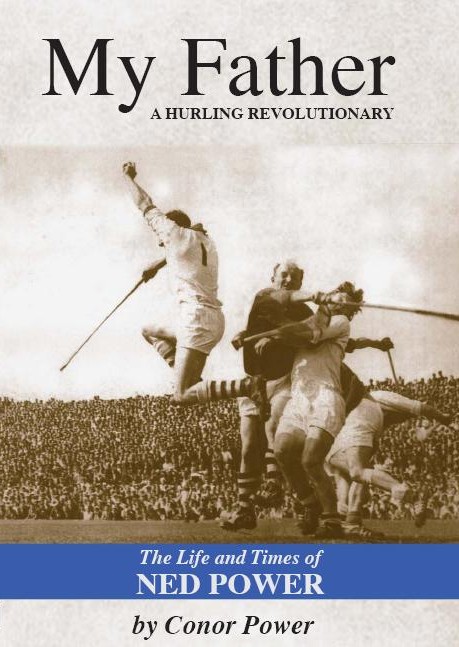 “My Father:  A Hurling Revolutionary”

OFFICIAL LAUNCH BY EASON’S DUNGARVAN AT THE PARK HOTEL, DUNGARVAN

LAUNCH OFFICIATED BY MR. CHRISTY COONEY, PRESIDENT OF THE GAA.

(For online orders of your signed copy , Click the “Buy Now” button below.)

STARTING WITH A PHOTOGRAPH

For as long as I can remember, I’ve been boasting about the fact that my father won an All-Ireland medal for Waterford in the 1959 All-Ireland Senior Hurling Final.  It became such a running joke, in fact, that in introducing me, certain friends would get the business of imparting this background knowledge out of the way as soon as possible – by way of a joke, you see:  “This is Conor… (Hellos & handshakes follow)… His father won an All-Ireland medal for Waterford in 1959.  Yes… They beat Kilkenny in the replay.”

Even though it was all in good humour, the whole joke of me ensuring to tell everyone I met about my dad was actually a great and unembarrassing vehicle which actually allowed me to tell everyone about my father.  Because I was always as proud as punch of him.  Although I stopped playing hurling at about the age of 15-16, Waterford is a dyed-in-the-skin thoroughbred hurling county.  I like to think, in fact, that our small county is to hurling what Holland is to soccer.  Like Waterford and its hurling, soccer in Holland is of the highest skill level and they regularly punch above their weight with larger countries around them that have a much bigger pool of players – such as France, Germany, England and Italy.  Yet despite all this, the Dutch have never won the World Cup, unlike all of their aforementioned neighbours.  In a similar way, we the people of the Déise are what you might say mad into our hurling.  We can play it skilfully and, for such a small county, we regularly produce a high number of good players.  We regularly punch above our weight in this respect, but we don’t get much in the way of big trophies.  I’m afraid we don’t – or at least, not as much as we feel we deserve to get.

All this is to explain why I was always so proud of the 1959 thing.  It’s because we haven’t won it since and people with any knowledge of hurling are always surprised and amazed to meet someone with a physical connection to a Waterford team that actually won an All-Ireland – it’s that rare.

Although I’d seen this famous photograph before, it wasn’t until I was at least in my late teens that I realised that it was a famous photo.  I’ve since discovered that it is definitely the most famous thing about my father.  All those who know of him will be more than familiar with it, but equally many people who know or care nothing about hurling will have seen it.  It was taken on June 8th, 1962 in a Munster semi-final match between Cork and Waterford.  The photographer was a man named Louis McMonagle and it was entitled “Hell’s Kitchen”.  It is a classic action photo and it has appeared in numerous locations around the world – for many who don’t know the first thing about hurling, it’s as good an introduction as any to its mixture of physical force, danger, speed and pure skill.  All of that is encapsulated in this one famous shot.

But pictures can be deceiving:  From looking at the heroic manner in which my dad appears to rise into the air and snatch the ball out of the sky, leaving the other players tangling on the earth, it all looks like an athlete at the top of his game going on to conquer all in an unstoppable team.  But sport is not always a place for fairytales and, in truth, my father was fortunate, at that point, to be picked on the team and to subsequently make it into that photo.

In 1961, more than a year before this picture was taken, Waterford’s All-Ireland winning goalie – 31-year-old Ned Power – was sitting, deep in concentration, waiting patiently to line out in goal against Tipperary. Another team member, a regular battler with pre-match nerves, noticed what he mistakenly took to be the same pre-match jitters in Ned and offered him a “tablet” (this was in the good old drug-free days in sport !). The tablet turned out to be a “downer” and Ned played an uncharacteristically sluggish and unfocused first half making several costly mistakes much to the consternation of the coaching staff. He was taken off at half time and unceremoniously dropped from the panel.  His days were over. He “hadn’t it” any more….

Ned could easily have lived out his days in bittersweet memory of his highs with Waterford that petered out in the low of that bizarre drug-coloured “final” match. Mick Curley, another famous Tallow goalkeeper and himself unlucky not to make the ’48 All-Ireland winning team, urged him to “keep playing, keep making yourself available”. This he did.

A year went by and Ned kept playing and kept positive, a 32-year old has-been waiting for one more chance. A week before this picture was taken he got a phone call from a somewhat reluctant Waterford County board member. They were stuck and he was their last resort. The words they used were “Ned, would you ever come along on Sunday …we’ve no-one”.  My father’s own words were even less complimentary.  He said that he “must have been the best of a bad lot.”  So along he came and the months and weeks of pent-up frustration and preparation for this moment launched him into a sparkling display that peaked with that famous leap into the sky, caught magically here for eternity.

The Cork man in the photo is recognisable to any hurling fan – particularly if he/she is from Cork because it is none other than the famous Christy Ring, who died a relatively young man at the age of 58.  The Waterford defender he’s tangled with in manly embrace is Tom Cunningham, while the third Waterford player in the picture is Austin Flynn.  All of these players were teetotalling “pioneers” and, in the case of the Waterford players, came from the same school – namely Dungarvan CBS Secondary School.  That said, they were never in the same class with my father being the eldest, followed by Tom a year below and Austin a couple of more years below Tom.

The day after the match, my dad was back at his place of work – Naomh Mhuire National School in Tallow, Co. Waterford, where he was principal.  At 11 o’clock, a pupil named John McDonnell came up to him as he was walking by the school building with his colleague Mrs. Abbie Ahern.  John brought him the paper and it was then that my father saw the famous shot for the first time.  My dad’s reaction was minimal.  He was never interested in glorification of any one player in a team or even in the glorification of any one team from a place, and particularly so if it was he who was the centre of attention.  John’s memory of my father’s reaction was that it was “not a lot… the same as when anyone said anything good about him or of a very high proportion.  He’d bring it down to a more ordinary level altogether.”

After playing hurling at the highest level for Waterford during their most golden era, my father led a life which was to be dominated by GAA.  He was a husband and a father of six and he led his own little revolution around the country which was to touch the lives of many people, working at the grass roots; at the more ordinary level of things.